IS KITURFING A DANGEROUS SPORT?

It is reductive to say that kiting is a dangerous sport and I believe that the issue deserves a deeper reflection!

As an outdoor sport, it is normal that it involves risks. It is therefore necessary to act and practice in a conscious way to limit them and keep them under control as much as possible.

However, I believe that in order to evaluate the objective riskiness of a sport or activity and compare them with each other, it is necessary to act in a pertinent and thoughtful way.

What do I mean by “pertinent” and “thoughtful”?
It is important to analyse the risk factors, and not to jump to hasty and easy conclusions, most often resulting from hearsay.
I believe that it is appropriate and beneficial to think with one’s own head, and I will be happy to receive conflicting but reasoned theses.

Here’s the list of elements I found interesting to analyze:

What is a danger?

The possibility of something unwelcome or unpleasant happening.
Sticking to the meaning of the term, as it is indicated in the dictionary, all our physical activity (whether cooking, walking or extreme sports) is more or less predictable, and due to the presence of even the slightest factor of unpredictability is in itself risky.

Therefore, since every activity is intrinsically risky, what procedure do we use to label some of them as dangerous and others as not?
The answer lies in the continuous search for simplicity, in an unreasonable conclusion. In practice, when we witness a dangerous event or accident, instead of contextualising it, we express an overall judgement of such activity or sport as a whole. It doesn’t matter whether it is virtual (YouTube) or real.
It’s no coincidence that those who judge, for instance, kiteboarding as a high-risk sport, usually tend to give the same examples, which are not based on the context.

But it is not and must not be so easy to draw conclusions.

Comparing the risk in a relevant way

The word “relevant” indicates the immediate relationship of reciprocity in terms of logical or functional attributions.
So I feel compelled to argue that it is not possible to compare a person walking close to home with a person trekking in the mountains, or a person swimming in the pool with a person crossing the English Channel, or even a person riding a kite with 15 constant knots with an athlete performing tricks more than 20 meters high… I think you know where I’m pointing.

Every activity or action that we undertake involves variables that must be analyzed in order to define it as dangerous or not, or better define its degree of dangerousness. 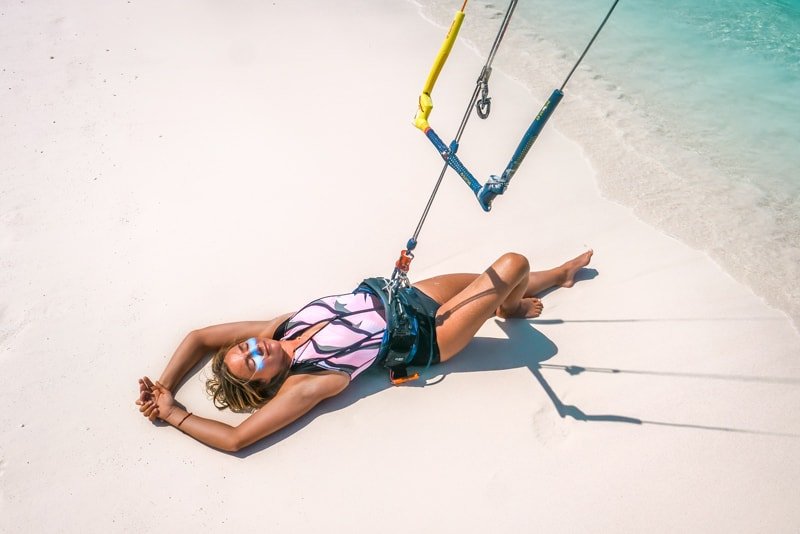 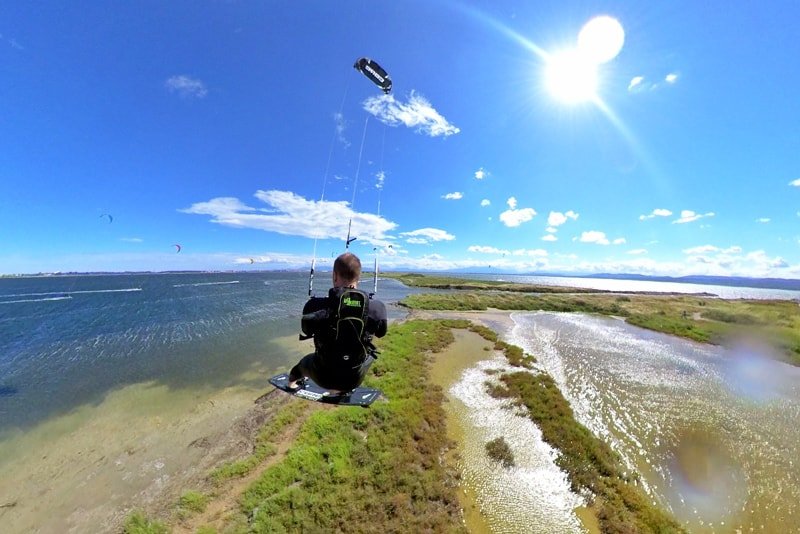 Feature through which we can predict and imagine what is going to happen.
When kiting, one of the biggest sources of unpredictability is weather conditions. Practicing in a geographically unstable place (strong and gusty winds, extreme waves) or in a stable one (constant trade winds, calm water) is very different.

It’s the predisposition to be exposed to the possibility of being attacked or harmed, either physically or emotionally.
Hence, a beginner will be, whatever his activity, more prone to a harmful event than an experienced person, all variables being equal.

It is essential to balance vulnerability with ease.

The emphasized example of a beginner who self-launch his kite and ends up on a tree, should not be symptomatic of the riskiness of the sport, but rather of the stupidity and hubris of the person. He is vulnerable and he is making things more complicated. On the contrary, if he/she follows a course the probability of ending up in a tree or injured would be very low.
Being aware of one’s limits is essential.

The probability is he extent to which an event is likely to occur, measured by the ratio of the favorable, or unfavorable, cases to the whole number of cases possible. While frequency is the rate at which something occurs over a particular period of time or in a given sample.
Being two purely mathematical formulas, they tend to exclude subjectivity, i.e. the risk taking of the individual.
Any data must be pertinent to the risk taken by the subject and assessed as such.

Although we do not have valid and relevant statistics, I would say that the probability tends to be minimal when we refer to accidents involving an experienced rider practicing in stable and predictable weather conditions.

Severity is directly proportional to the consequence of a harmful event.
For this reason the severity of the damage of an individual jumping 30 meters with a kite will be potentially higher than the one who sails quietly close, but not too much, to the shore in non-hazardous weather conditions.

A kiter does not necessarily expose himself to serious risks by complying with safety rules and not taking uncontrolled risks.

It is important to differentiate, within the same category, leisure activity and extreme practice. Likewise, those who swim in the pool are not subject to the same dangers as those who swim across the English Channel, those who participate in the Red Bull King of the Air will not expose themselves to the same risks as those who ride slowly in calm water, close to the shore, with the trade winds.
In every activity there are those who practice a sport in a controlled and low-risk way, and those who, consciously or not, decide to push their limits. However, the conclusions are often evinced and simplified by evaluating the riskiest activity, instead of doing the opposite. Thus, the reputation of the activity itself is unjustly undermined.

Closely related to this argument is the definition of hubris, i.e. excessive pride or self-confidence (already mentioned above). I often hear people say that kiting is a dangerous sport for the simple fact that they have seen the latest YouTube video that shows the worst incidents of amateurs, acting recklessly and smugly, just to maximize likes and views.  Whoever pushes himself outside his limits, stepping out of the recreational activity, must be aware that the risk increases considerably, and should not be taken as a scapegoat to condemn the sport he practices.

This difference, although obvious, is essential and must be taken into account. 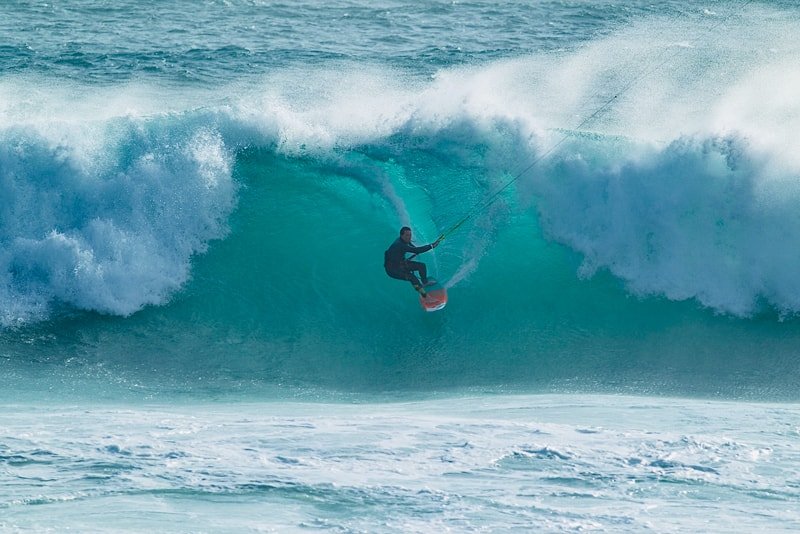 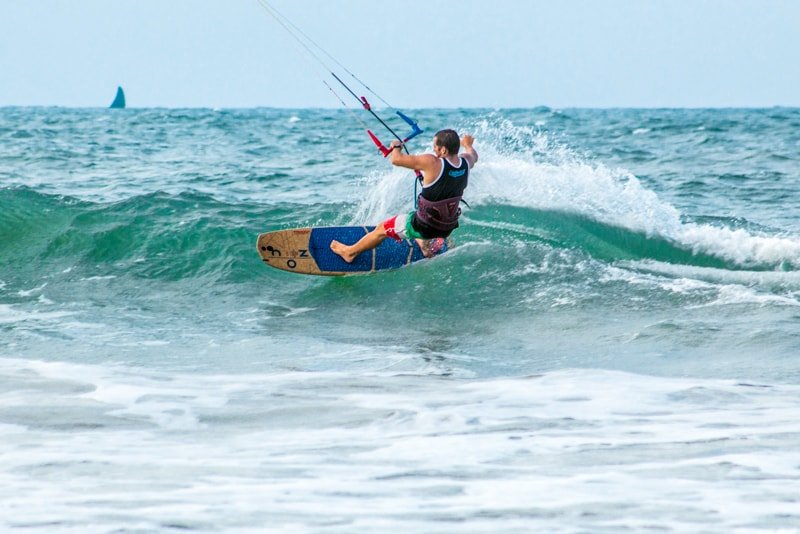 What are the real risks in kiteboarding?

I could stand here for hours listing them if I acted like the devil’s advocate.
Here is a small analysis of some possible and rare risks, most of the time due to gross mistakes and not attributable to kitesurfing as a sport but rather to the shortcomings of the individual:
ending up on a tree while launching a kite is the result of inadequate control or insufficient wind’s analysis, getting tangled up in your own lines is often due to performing a difficult trick or hunting harder conditions (waves), getting hurt on the beach is often due to the desire to show off or to the necessity for a pro to realize a shooting, drifting out into the open sea (trouble getting back upwind) is usually due to excessive risk taking (wind is too weak/strong or off-shore), etc.

Incidentally, I believe that an aggravation of the risk is often due to the innate or instrumentalized inclination to exceed one’s limits. This phenomenon has been accentuated by the fact that the social media have become an integral part of our lives, putting us in constant competition and showing us ways of life that are “unreal” but labeled as “dreamlike”. This makes it difficult to accept our modest but normal realities and pushes us to overdo and imitate those who have a different background, without having the skills. If we let those who have the skills take the greatest risks, we will be able to reduce the risk considerably.

Most of these “serious risks” are very unlikely and tend to zero if the increasing hazards are limited.
The real and current dangers remain the contusions, the sprains but above all the unpredictability and carelessness of those who ride around us. However, it can be reduced if we are careful and keep the right distance. 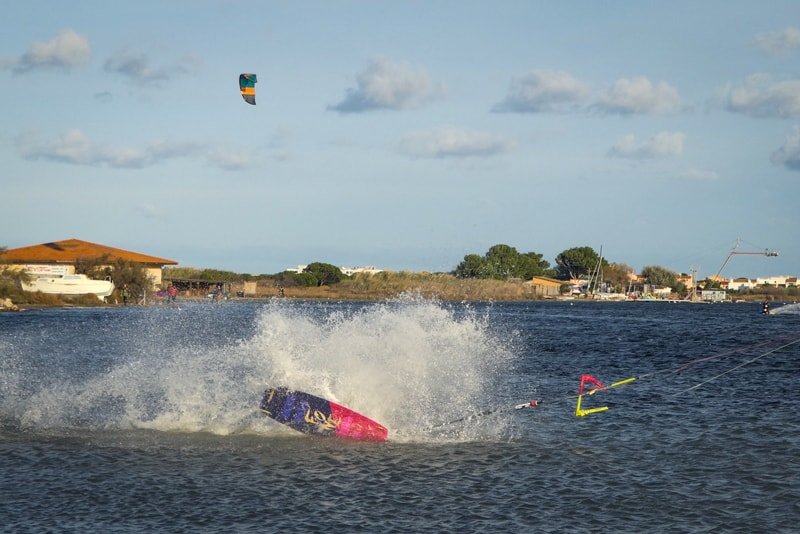 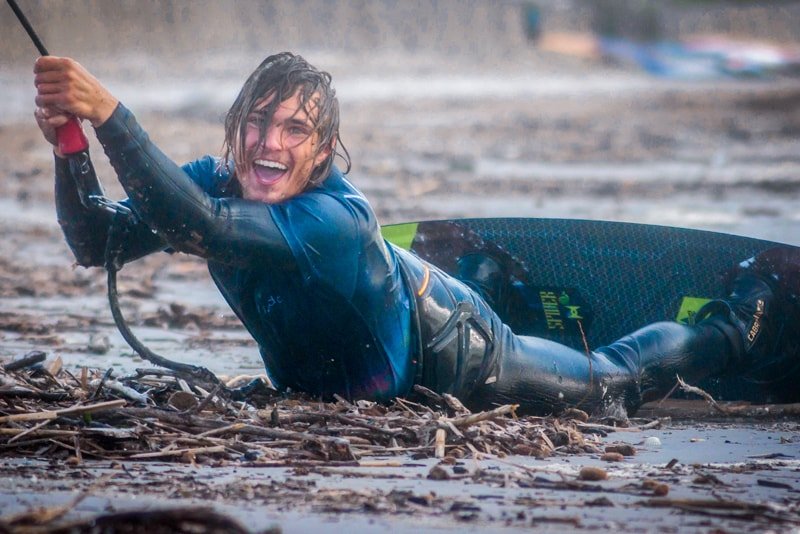 According to what has been written, there is no point in saying that kiting is dangerous in itself and it is reductive. The starting assumption to define dangerousness is based on the reflection of a certain action or activity evaluated in its less risky hypothesis/conditions.
If you objectively increase the risk in an individual practice, acting on the above-mentioned variables, it should not at all interfere with the judgement of the action or activity as such, but on the worsening of the risk of the subject.

An experienced rider, who trains in stable weather conditions, who performs simple, basic gestures and uses a non-sharp support reduces the risk by bringing it progressively close to 0.
Increasing each of these variables will increase the risk taken by the individual, but not the kite as a sport itself.

However, this is not an apology to kitesurfing, which remains a sport influenced by countless variables related to the surrounding environment and a material not always foolproof.
The examples, sometimes extreme, are to simplify the concept and I hope they are not misleading.
The basic idea is that any sport, including kiteboarding, can be dangerous. The important thing is to be aware of our practice, to better evaluate our skills, to know our limits, to analyze the area of evolution, etc., to limit the risk factors as much as possible.

Stay reasonable, be aware of your own limits to know how far you can push yourself.
RIDE SAFE!