Going kitesurfing in Brazil is a lifetime experience. Each year the best riders of the planet go to Brazil to train thanks to it’s long cost stroked by the constant trade winds. The coast is so long and varied that you’ll find what you’re looking for, from freestyle to big air, from freeride to wave riding.

But how do you choose the right place to go, or the right equipment to carry?

After traveling for more than a month along its coasts I decided to write an article about the spots I visited that will help you in planning your trip.


Below is a list of the article’s contents that allows you to focus on what you really need.

But If you are looking for another spots to visit around the world click here, you’ll see some of the best country to go kitesurfing in and a detailed spot guide for each one.

You want to know why you should read my article and trust me. Read something more about me and why I wrote it

The brazilian coastline is caressed by the trade winds from E-SE.

The best kite period is from September to December, in this period it’s almost everyday windy.

The wind changes according to the place, in the north, close to Jericoacoara, it blows at aorund 30 knots, in the south of Fortaleza, close to Barra Nova, it is much lighter and it blows at around 16-22 knots.

The average temperature, especialy during the kite period, are high, around 25° to 30°.

The water temperature is warm all the year-round, between 27°-28°.

Yuo can kite in swimsuit.

The brazilian coastline is  huge and the wind it’s not the same everywhere. The more you head to north (Jericoacoara) the more you need small kites, as a 7m for a 70-75kg person.

If you stay around Cumbumo – Taiba the kite most useful will be the 9-10m.

The more you go to the south (Barra Nova) the more you need a bigger kite as a 12m.

February – April is the rainy season.

August – Novemebr/December is the driest period.

In Fortaleza you can split the year in two seasons: january till june is rainy , july to december is dry.

SPOTS WHERE I’VE BEEN 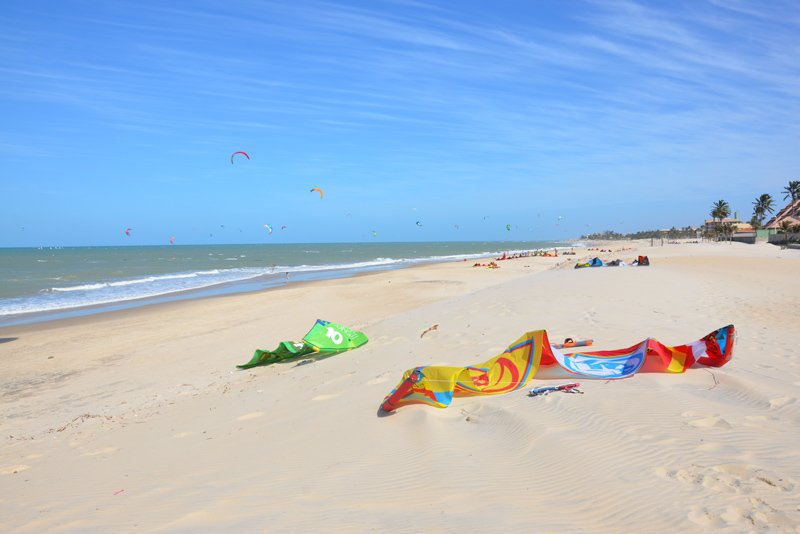 Cumbuco is the closest village to Fortaleza and the one where all the kiters start their trip. The ocean is often choppy and the most practised style is the freeride. Moreover you have plenty of possibilities to do some downwind from Cumbuco.

Close to Cumbuco you have some lagoonsthat are perfect for freestyle. But they are often overcrowded.

If you want to do some big jump it’s better to go further north.

Cumbuco suits all level thanks to its on shore wind and the big beach with two kite schools. When the ocean get rougher it can be less pleasant for beginners. Keep in mind that in the ocean you have choppy water all the time, if you want flat water you need to go to the lagoons.

Facilities : Cumbuco has everything you need: restaurants, kite schools, hotels and pousada for all budgets. If you want a good quality hostel I advice you the Bada Hostel, but if you want your own room you can ahead to Bada Pousada.

Warning : nothing to declare.

Cumbuco is a freeride paradise where you can do lots of downwind or just enjoy the huge beach. To do some freestyle you need to go to Cauipe, Tabuba or Taiba lagoon 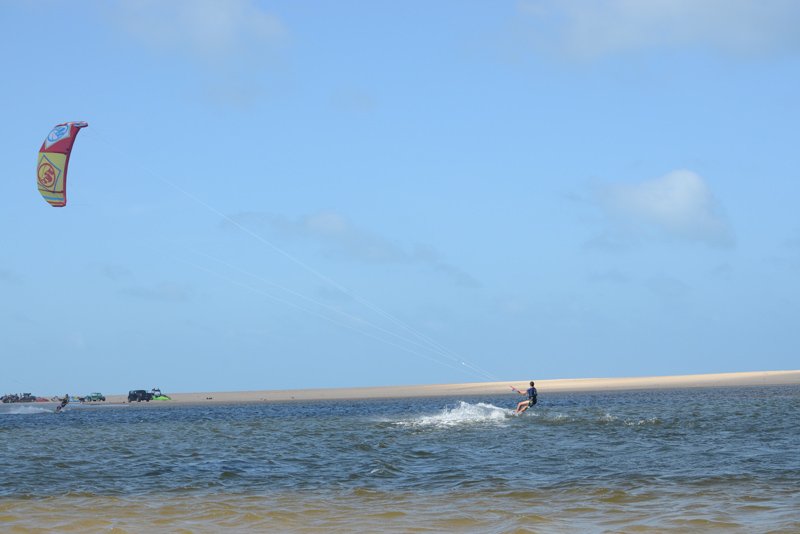 In Taiba you can enjoy the freestyle in the lagoon or the wave riding in the ocean. Taiba is perfect for both style especially because it’s less crowded than Cauipe lagoon.

If you want to go to Taiba without taking a car you can go downwind from Cumbuco. During you dowwind you can enjoy a good freeride, catch some waves and do some jumps.

Taiba suits all levels. The lagoon is perfect for beginners. If you cross a sandnack at the end of the lagoon you will find the ocean and it’s choppy water or some waves. You can practise lots of differents styles in Taiba.

Facilities : there are not any structures around the lagoon where you can rest or eat, but the village is just 2km away.

Dangers : the lagoon can be overcrowded.

Warning : nothing to declare.

In Taiba a flat lagoon to freestyle is waiting for you, as well as some waves in the ocean to do some wave riding 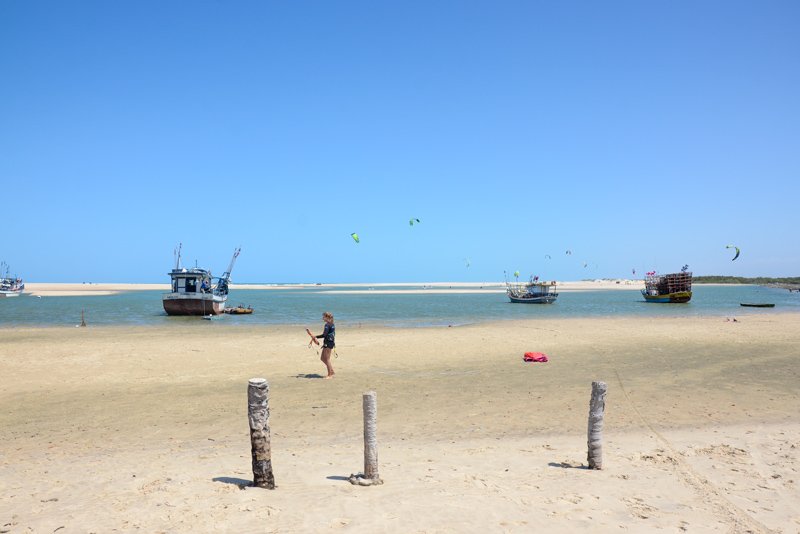 Barra Nova is a small village in the south of Fortaleza. In barra Nova you will find a big flat lagoon and light wind. The best waty to enjoy Barra nova is doing some freestyle or some old school tricks.

The lagoon is empty in the morning and it fills up in the afternoon so during the first hours of the day you can do some freeride in the ocean, carch some waves or just try to find a free spot in one of the many little “lagoon” that will disappear later on the day.

Barra Nova suits everybody thanks to his on-shore wind and shallow lagoon. The only problem is that the big lagoon become often pretty crowded.

Facilities : the village is tiny but it has everything you need.There are a couple of restaurants at the beach, one kiteschool and few pousadas. The village is small so it can be a good idea to book in advance if you want to find a place to sleep. There is a nice pousada, Pousada Barra Nova Kitesurf, that has a good location and the owner are nie and welcoming. If you want to go out for dinner you can go to Cascavel, just 6-7 km away.

Dangers : The lagoon it can be often overcrowded.

Warning : the tide.During the monrning the big lagoon is empty so you can ride in the ocean or into the tiny lagoons beyond the sandbank. After lunch time the tide goes up and the littles lagoons disappear and the ocean fill the big lagoon. 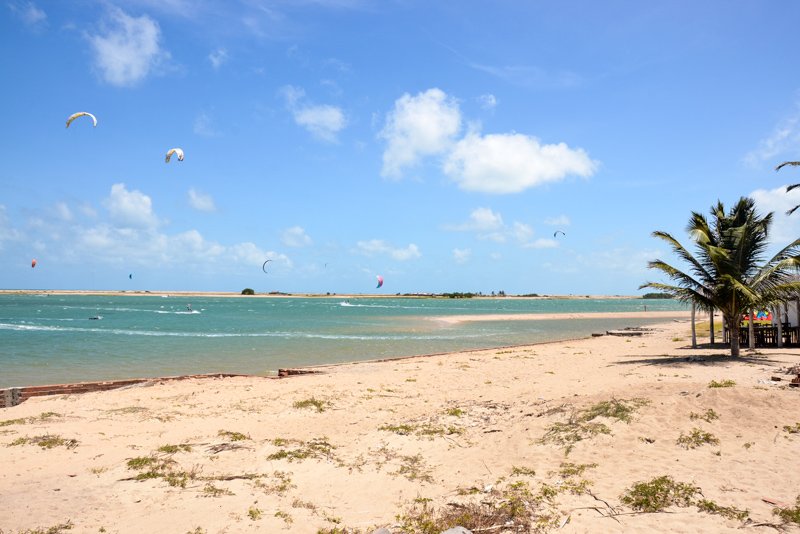 Ilha do Guajiru is also called “the flat water sea” thanks to its huge lagoon. The lagoon is so big that it’s a pleasure to do some freeride and do some downwind from the north to the south going even through the ocean. According to the downwind you can or go back upwind or arrange a transport back with your pousada.

The lagoon is also pretty flat which is perfect for some freestyle, and when it’ not too crowded it can be nice to do some big air due to the strong wind.

Side-on shore wind, flat and shallow water make this lagoon perfect for all kind of levels. But you need to be carefull because at low tide some area are too shallow ant you can risk to hurt yourself.

Facilities : on to the side of the lagoon is full of pousadas. It can be a bit more expensive than the other village and the pousada are often full so I advice you to book in advance.

Dangers : during the low tide some area of the lagoon can be really shallow and the sea bottom sharp.

Warning : the tide. It can happen the lagoon is almost empty to fill it up later on. so check the sea level before to get ready.

Ilha do Guajiru, “the flat water sea”, is a fantastic freestyle and freeride playground 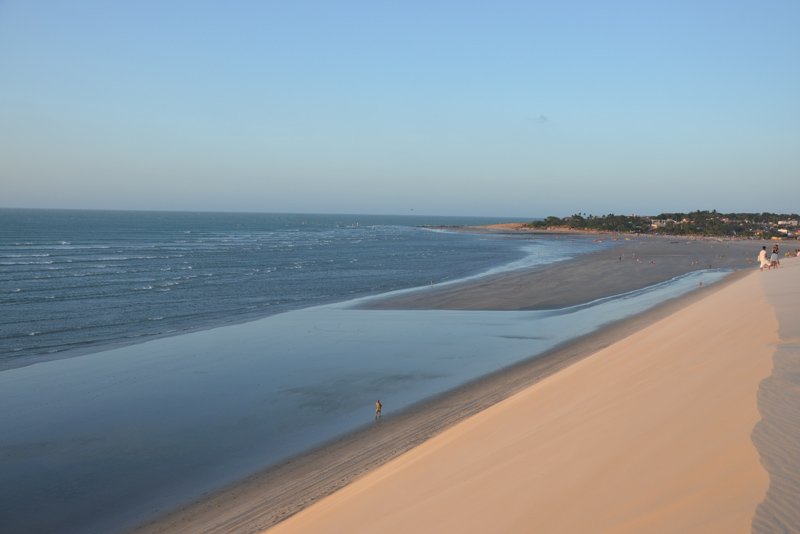 Jeri is a village out of the ordinary and I loved its nightlife and the vibes. If you want to kite you need always to take a buggy to get to the spot, and I didn’t like it that much compared to all the other brazilian spots.

The wind is often strong and gusty which is nice to do some bigair rather than freestyle.

You should not miss the downwind in Jeri, that’s way I think the freeride is the best kitesurf discipline in Jeri.

Jericoacoarais one of the rare village inn the brazilian north east where the wind can blow off- side off shore, which it’s not adviced for beginners and intermediate level. The choppy water andthe strong wind make the task even more complicated.

If you are a beginner I do advise you to go northern up to Guriù’s lagoon.

Facilities : a Jeri you can find everything you need. You need a buggy to get to the spot.

Dangers : the wind blows off-shore so it’s not the best for beginners.

Warning : be careful about the wind, it can blows over 40 knots.

Jericoacoara is the place to go thanks to its vibes and its downwind. Indeed Jeri is located between Prea’s village and Guriù lagoon 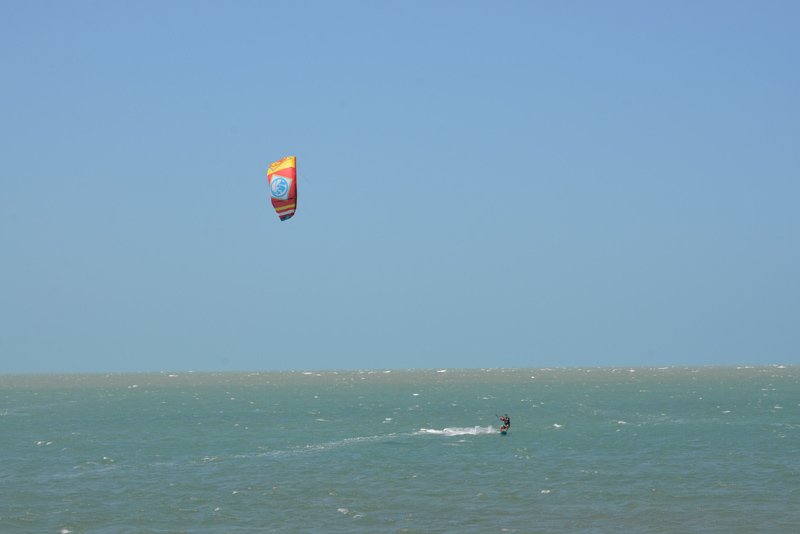